Crescendo Inc. integrated the EQ-i® assessment into our Emotional Intelligence products and service offerings in 1999. We chose the original EQ-i®, authored by Dr. Reuven Bar-On, because it was the first validated assessment to measure social and emotional intelligence. Additionally, we found it to be a very versatile assessment tool which has allowed us to use it with leaders at all levels in organizations of different types (large, small, public and private.)

EQ-i2.0 (released July 2011) and published by MHS (Multi-Health Systems), builds on the original Bar-On Model. It reflects the dramatic shifts in cultural diversity, changing attitudes and value systems in North America that have occurred since the original EQ-i® release in 1997

"a set of emotional and social skills that influence the way we perceive and express ourselves, develop and maintain social relationships, cope with challenges and use emotional information in an effective and meaningful way."

The EQ360 is the companion assessment that measures the same emotional and social competencies as the EQ-i2.0 self-report, but from the perspective of those who work with the individual being assessed. The two assessments (EQ-i2.0 and EQ360) work together to provide a more complete view of an individual’s strengths and limitations, with the goal of helping organizations maximize their workforce potential.

Emotional Intelligence (EI) Practitioners use these tools in a variety of ways including recruitment, development, coaching, training, team-building and conflict resolution. Users of EQ-i2.0 can be confident that the scores generated by these assessments will be consistent and reliable. Decades of research prove the effectiveness of the EQ-i in measuring emotional intelligence, related concepts and relevant outcomes. 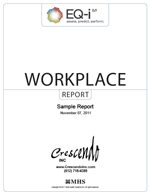 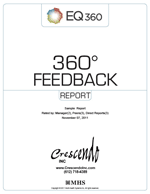 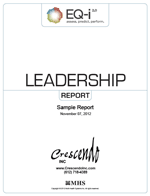 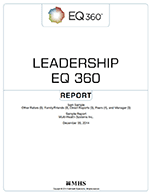 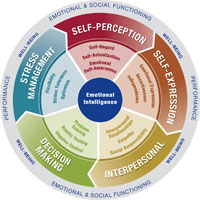 Self-Regard - Respecting oneself while understanding and accepting one's strengths and weaknesses. Self-Regard is often associated with feelings of inner strength and self-confidence.

Self-Actualization - Persistently trying to improve oneself and engage in the pursuit of personally relevant and meaningful objectives that lead to a rich and enjoyable life.

Stress Tolerance - Coping with stressful or difficult situations and believing that one can manage or influence situations in a positive manner.

Optimism - Remaining hopeful and resilient, despite occasional setbacks. Optimism is an indicator of one's positive attitude and outlook on life.

Independence - Being self directed and free from emotional dependency on others. Decision-making, planning, and daily tasks are completed autonomously.

Reality Testing - Remaining objective by seeing things as they really are. This capacity involves recognizing when emotions or personal bias can cause one to be less objective.

Impulse Control - Resisting or delaying an impulse, drive or temptation to act and involves avoiding rash behaviors and decision making.

Interpersonal Relationships - Developing and maintaining mutually satisfying relationships that are characterized by trust and compassion.

Empathy - Recognizing, understanding, and appreciating how other people feel. Empathy involves being able to articulate your understanding of another person's perspective and behaving in a way that respects others' feelings. 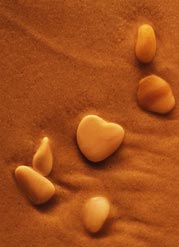